The placement of Speed Clamps for ROLAND REKORD IIIB BLUE/R600 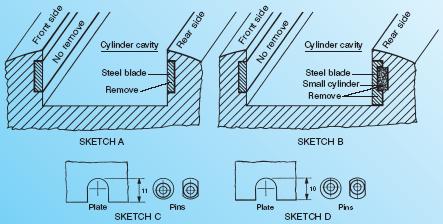 Remove the old clamps along with their retainer parts and springs. At the rear side of the cylinder cavity, in the groove, there is a steel blade (see sketch A for older machines or sketch B for newer ones and R-600). This steel blade (Sketch A or the steel blade and the 4 small cylinders sketch B) has to be removed because it is no longer required. The other steel blade that is at the front side of the cylinder cavity has to remain in its position after cleaning it because it is required. Clean the whole cylinder cavity well and particularly the groove of the rear side, where you removed the steel blade or the steel blade and the 4 small cylinders. Check the front clamp if the two register pins N17 & N19 are at their correct sides depending on what kind of punch machine for the plate you use because there is a difference of 1mm in the depth of cutting the plate between the various punch machines. If the register pins need to be changed, you have to loosen the screws (fig.9) that hold them. You remove them and you reinstall them on their opposite sides. The difference between the two sides of pins is shown in sketches C and D. If you use plates with no holes then you remove the two register pins. If in future you use plates with holes, you reinstall them very easily. Spread a fine film of grease on the faces (fig.1) of the retainer parts of the clamps and on the face of the steel blade for the fast and parallel shifting mechanism for the rear clamp, R57 light or R58 heavy clamp.

Place the clamps in their positions in the cylinder cavity as they are connected by “the mechanism for placing and removing safely” N68 secured with pins (fig.11). The springs R06 are now compressed and the three retainer parts R44- R43-R44 are in their place. As they are connected, place and screw without tightening the front screws (fig.3A) of the three retainer parts of clamps. With the help of the two aluminum wrenches, remove the pins (fig.11) that keep the clamps connected and the springs are released. Screw the middle screws (fig.2) on the three retainer parts again without tightening them. After that, turn the special toothed screw N62 (red) of the fast and parallel shifting mechanism to the right so as to leave space for the aluminum wrench in order to move the clamp backwards. Place and screw the back screws (fig.3B) of the retainer parts of clamps and tighten them completely. (On the middle retainer part R43 for the support of the clamps in older machines, the third screw can not be put). By turning left the special toothed screw N62 (red), you approach again the clamp towards the side of the cylinder. Tighten completely the middle screws (fig.2) of the three retainer parts of clamps. With the help of the aluminum wrench, remove the front clamp so as to leave space in order to tighten the front screws (fig.3A) completely. The new speed clamps are now in place.

THE OPERATION OF SPEED CLAMPS

The upper clamp opens and closes with the lever wrench N43. In order to close the clamp, you have to move it forward to the lid end (fig.8). For the opening of the clamp, the lever wrench has to be moved backwards until you feel that it has fallen into a flat gap. The upper and lower parts of the clamps are connected together with a series of Hexagon socket countersunk head screws N01-M10X35 that are for adjusting, when required, the pressure that holds the plate. The adjustment is always regulated with the plate tightened. For the above adjustment, you must use a long hexagon socket key 6mm by moving it only a little. You have to use some strength because the above screws are secured with a plastic ring N52/N57. There are compression springs N09 between the two parts of the clamp that help to open the upper part (lid).

-In order to place the new plate you have to do the following:

FRONT CLAMP: The end adjusting screws R19 must not push the clamp right or left so that the self-centering mechanism R09/R10/R11 can keep the clamp automatically in the center. If during the set-up you use the end adjusting screws to move the clamp right or left, keep these screws tightened till the end of the particular work. By the two operating side screws R45 place the clamp in position “O”. In this position, the horizontal line (fig.4) of the ring scale N30 is aligned with the face of the clamp and the bold vertical line is on the top. If later the indicator needs correction, there are two small screws (fig.7) that will put it in the right place.

You can also place the clamp in position “O” by using the two special adjusting screws R47. These screws are not for the stretching of the plate, if you use them, they always remain in the same position where you have adjusted them. Unscrewing the 4 operating screws R45/R46, the clamp by these two screws remains in the standard position “O. If during the set up you need to move the clamp forward, unscrew the adjusting screws R47 and after the printing process place them back to their correct positions with the help of the rings line. If they are not useful, unscrew them a few mm and they are as they do not really exist there. (These operating screws are secured with a plastic to turn hard). For the above adjustment, you can also use the two indicator sets N34 so as the middle thick line (fig.6) to be aligned with the face of the clamp.

REAR CLAMP: At first, use the special toothed screw (red) N62, which you turn left, to move the clamp toward the side of the cylinder. Place the 4 operating rear clamp screws R55 in position “O”. In this position, the horizontal middle line (fig.5) of the screws ring is aligned with the face of the clamp. Bring the two pieces of the rear clamp in the center by using either the end screws R19 or by pushing the clamp. Align the two parts of the split rear clamp with the groove (fig.10) of the middle retainer part R43 and correct the margin between them by using the double adjusting screw R18. Place the new plate as always. Remember to press the lever wrench N43 so that the clamp is closed and the lever wrench touches the upper part of the clamp (fig.8). It is better not to close the first part of the clamp to the end. It is preferable to close the second immediately and then go back to the first for the final closure. In this way the plate does not warp. After that, turn the special toothed screw (red) N62 of the mechanism, to the right, for fast shifting of the rear clamp.

ATTENTION: This special screw (red) N62 must be turned up to the end, until you feel that it has reached the end of its cycle.

SPECIAL ATTENTION MUST BE TAKEN IF IT IS DIFFICULT TO BE TURNED. IT IS NECESSARY TO UNSCREW LIGHTLY THE 4 OPERATING SCREWS R55 OF THE CLAMP FOR THE STRETCHING OF THE PLATE. THIS SPECIAL SCREW IS NOT FOR COMPLETELY STRETCHING THE PLATE. IT IS JUST FOR MOVING THE CLAMP IMMEDIATELY, WITHOUT USING MUCH FORCE. The function of the special screw (red) N62 has been completed. As mentioned above do not use this special screw for the final stretching of the plate or for the different adjustments on the clamps. Tighten the 4 operating rear clamps screws R55 completely and do the same at the front clamps operating screws R45/R46. From now on, the operation of the clamps for the final coincidence of the colors or for the corrections, is, as it was with the old clamps.